Blogfinity
(2 W) A social misfit seeks relationship advice from the no-BS blogger Sassy Sage, whose boundaries soon are challenged by this LW’s need for electronic connection and approval.

Sixty-Sixed
(2 W) Hungover and late for class, Glenn boards the notorious 66 bus, only to find herself seated next to a mysterious character dispensing infuriating wisdom. 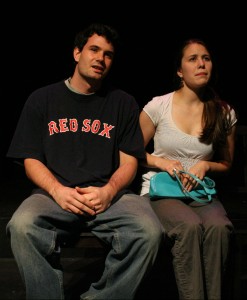 Downtown Crossing
(1 W, 1 M) Riding public transportation affords many opportunities to witness relationship drama. Here, public transportation is not only the setting but the cause of discontent. A young couple tests their bond with a ride on Boston’s Orange Line. Will they get off at the same stop?

The Double Life of Clem Midnight
(2 W, 1 M) A yuppie couple have a special bond with their cat, Clem, and give him all the freedom he wants to roam the neighborhood. But when Clem turns out to be splitting his time between them and another family, Don and Stacy are shocked by his betrayal and forced to reconsider their concept of ownership. A sly comedy that asks if there any hope of reconciliation between the species, let alone between humans. 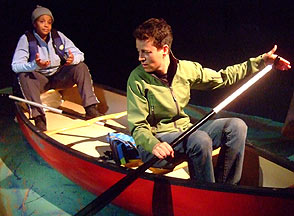 October (2 W)
On a quiet lake deep in the woods of Maine, two women paddle their canoe. For Carol, the retreat is a welcome relief from the intensity of their life in Manhattan, but her lover Abby can’t understand the charm of the wilderness. In the middle of the vast, cold lake, Abby’s hurt and rage explode to the surface and nearly do them both in. The two of them must come to terms with the very different ways they respond to danger, fear, and loss.

Shooting Sparks
(1 W, 1 M) High on a balcony in a burning building, a grand old dame makes her last stand, reveling in the old hellhole’s demise while a young firefighter desperately implores her to leave. With time running out, they both may have to make an impossible leap.

Noodles and Scrimscram
(2 actors) Noodles is a cat and Scrimscram is a dog. Needless to say, they can’t agree on what to watch on TV. From there, the fur really flies.

Future Perfect
(1 W, 1 M) In an upscale bar well past closing time, Craig, washed up and bitter at the tender age of 25, is having himself quite the self-pitying binge. In walks Danielle, a mysterious young woman in pajamas, who can’t seem to get her tenses right. She claims to be interviewing Craig for the alumni magazine of their old high school, where he was once voted “Most Likely to Succeed.” But her true mission, and origins, turn out to be anything but likely.

Arrhythmia
(1 W, 1 M) Late at night, a troubled affair comes to a head over the meaning of “heart.” For her, it’s the source of all feeling; for him, it’s a muscle pumping blood. Neither her passion nor his clinical diagnosis seems likely to bridge the gulf between them. Will either hear what the other’s heart is saying?
Published in Boston Theater Marathon, Vol. 2, available from Samuel French