In this contemporary re-imagining of Cyrano de Bergerac, Cyrano becomes Cy, a former Army sergeant kicked out under Don’t Ask, Don’t Tell. Cy now takes on the world with her words, holding court from her general store in a remote Western town near the base where she last served. She secretly adores her friend Rose, a vivacious artist, who in turn has her eye on Cole, an infantryman. When Cole begs for her help, Cy reluctantly signs on to ghost write his courtship of Rose. Things get complicated, especially as Cy continues to dig up dirt on the Army and goes toe to toe with her former commander. In love and war, words prove a dangerous game.

“Burning updates Rostand’s original by weaving in contemporary themes like gender inequality, military abuse and homophobia. The play…[gives] Curtin a ‘powerful’ opportunity to tackle those issues in a creative way.” —HuffPost Queer Voices

Workshopped at Boston Playwrights’ Theatre in 2013 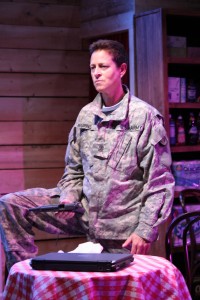 “Lazarus’s script is wonderfully painterly — she daubs in details judiciously, in such a way that the image only gradually comes into focus….This is not the courtly triangle envisioned by Edmond Rostand, and Lazarus’s plot likewise veers way off track — but in a way that will force you to confront her thesis, expressed by Cy, who’s in a permanent state of bitter mourning: ‘Silence is a killer.’ Would that the antithesis — truth can heal? — prove an effective antidote. This play is a good start in that dire 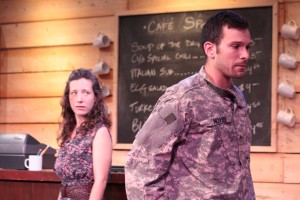